We Shall Develop Through Customers' Satisfaction!

Mrauk U was once the richest country in Asia during the 15th century and the capital of the Arakan Empire that ruled vast coastal regions of western Myanmar and into India as far as the Ganges River from 1430 to 1785. To explore the Lost City of Mrauk U, which has now become a major archeological site of Rahkhine, the most convenient mode of transport is to travel by boat. Myanmar Interlink Services Co., Ltd Travel & Tours provide services for arrangement of round trip tours from Sittwe to Mrauk U on special wooden express boats or special speed boats.

For those wanting to travel up and down Thanlwin river from Mawlamyaing to Hpa-an, ‘ThanLwin Princess’ boat is available for rent.
Myanmar Interlink Services Co., Ltd Travel & Tours have also made it possible for travelers to venture into Virgin Islands of Mergui Archipelago and Andaman Sea on river cruises.

Mergui Archipelago, located on the border of Thailand and Southern most Myanmar, comprises over 800 beautiful islands. Due to its virtual isolation, the island and surrounding seas are alive with an amazing diversity of flora & fauna and very beautiful underwater scenes and marine life.
Just north of the Surin Islands, an imaginary line divides Thai waters from Myanmar’s Mergui Archipelago. Also known as the Myeik (Mergui) Archipelago, this immense area covers approximately 36,000 sq km (14,000 sq miles) and included roughly 800 islands. Diving here is still in its infancy, as the entire region has been off-limits to outsiders since the late 1940s. The archipelago was opened for tourism in 1997, yet much of the area remains unexplored. Mergui Archipelago is perfectly designed for Adventure tours and Eco-tourism.

One of Myanmar Interlink Services Co., Ltd., Travel & Tours River Cruise Partners is the Paukan Cruises which presently operates 4 ships for river cruises along the Irrawaddy and Chindwin River that will unveil you the roots of Myanmar cultural heritage, the historical Royal capitals of ancient Myanmar, the lifestyle and traditions of the people living along their banks.

These luxurious all suite cruise ship will take you in style on voyages of breathtaking beauty and discovery on the great rivers of Myanmar: on the majestic Ayeyarwady from Bagan to Mandalay visiting temples, pagodas, palaces and monasteries along the way, while journeys on its great tributary, the Chindwin, will take you to places visitors rarely see – through the jungles of the north, forgotten villages, ancient towns almost to the Indian border. 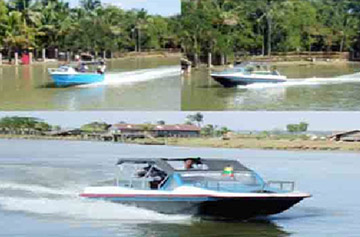